Kitty is back as many can see, didn’t want to say it before but she and Sahara are sisters, but they won’t be doing threesomes unfortunately so it was just something we totally forgot about until now that Kitty is back,  just a fact you didn’t know.

Red Velvet left yesterday, went looking for something to the south border of the country, and she won’t be available for over a month, she will return flashing a new image and the best is she won’t do anything to her best asset, all natural big breasts like always. Of course, we will have the same guys asking the same questions because they didn’t book her when they could.

When will she be back?:

Will she make an exception:

Alanna will be changing her image for better too, soon she will be leaving for a month as well so if you want to see her you better hurry. She has been commented so much and everything has been positive, she is becoming a start.

Irais will be returning soon, we are waiting for her to come back. Maybe in a few days, maybe in some weeks, maybe a month. No matter how much you lurker ask, you won’t see her anyway so go jack off again.

Bad thing about Musas leaving is the threesomes combinations will lack and also some catfights here and there so Irais won’t be doing threesomes with anyone and Black Widow got heartbroken by a Brayan (yes, a BRAYAN, not a boyfriend, not a sugar ATM) and wants to leave, until she recovers from the bad personal experience, she will take a short vacation so we will take her off.

We enjoyed the PS5, sorry for Brayan but we convinced her to share this with her friends, Brayan wouldn’t be able to appreciate such a machine. And don’t buy anything from Tencent, we got banned for nothing.

Speaking of which, some banned people are still here and not wanting to leave, so second chances are on the door, obviously knowing who they are  and that they are trying to get under the radar but, second chance is theirs but hope they don’t screw up with their Rude-Unclean-PLM-Creepy-Freak-socially inet stuff again we will have to deny over and over again the services. Some are even getting close to the dark side, not good to try it.

Some clients on the other hand take note and the girls appreciate the effort. You can look at some details Andrea and Red Velvet got from the clients. 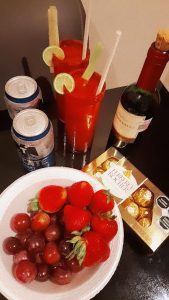 So enough gossips for today, we will take a rest, of course, on Sunday, so if you leave the best girls for last then don’t get angry later because there is no answer. All set now.