Will be uploading new material in the videos section, watch closely that hot lady you like.

Not talking about the Family members of Toretto, god damn that went too far.

Red Velvet and Alanna are recovering and still have a month off, maybe more, you will have to wait for them to return better as ever before, they work hard to get their goals and this was one of them. Helena is also getting her goals done, which also is her passion, she is modeling right now and doing photo session, despite her beauty, she doesn’t take that as her only quality so she is studying college too.

Some still ask: when will she return? If we don’t announce it, means she is not seeing anyone for now or you are from that 90% that she won’t see because of the Sugar ATM.

The vaccine campaign in the city will have a second round according to the news, obviously anything can change, as this country government is so inconsistent but most of the girls managed to go and get vaccinated despite the long lines, which advanced really quick and got their vaccine in less than an hour in most cases.

This was done in a massive way in an attempt to reopen the border for Mexican tourists using a visa, if you try to get into Mexico being a U.S. citizen or have a Green Card everything is still the same, just get your passport.

Some of you really have to do some reading, some keep asking for girls not available, some of them for over 4 years now. Some keep asking about the rates, about services the Musas don’t do, just read a bit and you will have every answer. We don’t want another idiot like that guy who “didn’t read” he had to bring condoms and wanted to Bareback with Estrella forcefully, and he didn’t even got money to pay the service, you can read about that case in the forum. But please notice, coming to the most dangerous city in the world to do stupid things is not the best option.

Hi to the copy cats, going to copy paste this too? Ma..mamia.

Got some questions about the traditional Mexican food, some of the most “traditional” Mexican food you can ask for at a restaurant, and the answer is hard because most parts of Mexico have their own traditional Mexican food. We must think in something eaten in all of Mexico, and that is tacos but we all know that, so we have to think about something else, and so the “Caldos” enter the scene, soup with vegetables and we can use different kinds of meat to prepare the soup but can only choose one, so the most traditional caldos are three: Res (cow meat), Pollo (chicken meat) and camaron (shrimp). The belief is that these are very nutritious and a good option when people are sick. And Mexican moms cook the caldos when the weather is dam hot as hell.

A view from a Caldo de camaron (What did you expect? Naked girls?) 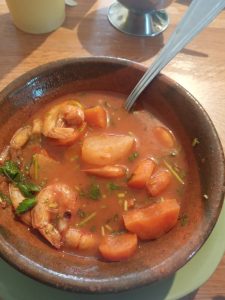 We have to run and make breakfast, ladies are lazy and don’t have the cooking skills of mexican grandmas. Stay sober boys.